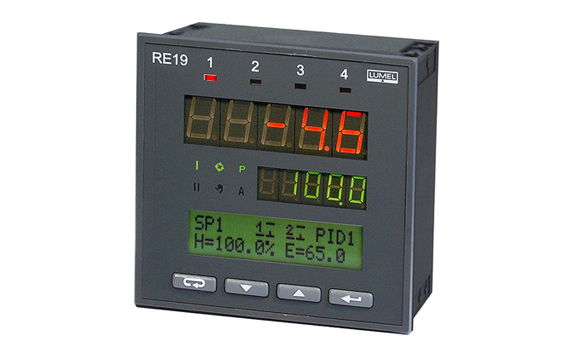 RE19S – for control with fixed set-point, with regard to the so-called soft-start and the possibility to switch the set-point by the logic input,
RE19P - for programmed control, in which the set-point changes in time, acc. to a chosen program - 15 programs with 15 segments in each,
RE19V – for stepper motor control – two control algorythms at choice, with or without a reflexive signal.

Basic controller features:
2 universal analog measuring inputs which accept standard thermocouples, resistance thermometers, linear currents and voltages,
3 displays, which the controlled value, set value, control signal, control deviation and other information concerning the chosen channel are displayed on,
2 x 16-character LCD display destined to communicate with the user,
10 signalling diodes serving to inform about the state of outputs,
2 auto-tuning algorythms helping to select PID parameters,
RS-485 interfaces with MODBUS protocol giving the possibility to apply the controller in control systems. Kinds of set-points:
control with fixed set-point, programmed: 15 programs with 15 segments in each (in RE19P) 4 outputs:
for control: control of heating , cooling or heating-cooling type, of step control to close and open the valve (in RE19V),
for alarm: from measured value or from control deviation,
for retransmission: to retransmit measured values, set values or control deviations,
for signalling: to signal sensor damages or logic input states Logic inputs:
2 configured inputs by the user,
remote control of the controller operation – stoppage and restart of the automatic control,
clearing of the stored alarms,
blocking of parameters changes from the keypad,
switching of set values or PID parameters,
remote control by the programmed control – stoppage and starting the program, jump to the next segment ( in RE19P).